Educated at Malvern College and University College Aberystwyth Bill Hartley founded the company in 1939 initially as electrical engineers for industry. The business started in Frankwell and then expanded into another small works in Ketley.

The Early Days of Hartleys

On 4th July 2006 Mr Herbert Hulme now living in Wem told me his recollections of the early days of Hartleys. Later further meetings with Nigel Cutting, Ken Lock,Ray Leech and Barry Gwilt added to the story and the pictures from their personal archive. 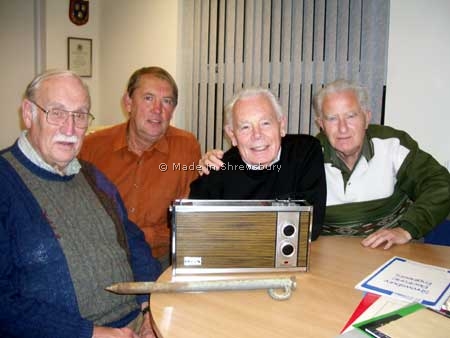 Nigel Cutting, Barry Gwilt, Ray Leech, Ken Lock with some memorabilia and ephemera from Hartleys Brochures and Accounts and also an HMV Radio from the 1960`s from Ray Leech and a surplus tent peg that was destined for the Falklands in 1982 from Ken Lock. Thanks also to Ann Perks and Jean Dudgon also contributed some memories and photographs and to Bob Leek for the works brochure from the 1980`s.

Herbert had started his working life in 1932 as an apprentice with Thomason & Co at 45 High St Shrewsbury Bill Hartley was the Sales/Electrical Manager.

In 1936 Thomason sold his interest in the company and Crawshaw-Ralston took over the business at this point a number of managers left and Thomason linked up with Bill Hartley and Thomason Hartley traded from Barker Street Shrewsbury.

After a short time Bill Hartley left and set up Hartley and Co in Frankwell trading as Electrical Engineers. This company did some work with a crane maker from Swansea making prefabricated wiring harnesses in the name Octopus Wiring.

It was on one of the trips to Swansea after the war that Bill Hartley met John Symonds and the two men got on well together and John Symonds relocated to Shrewsbury to assist with the sales of Hartleys products and services.

The work on the wiring harnesses grew and the company was building the preformed house wiring kits in Ironbridge and Ketley.

In 1949 the year The Royal Show came to Shrewsbury, Hartleys moved to Monkmoor to fulfil some major orders for wiring kits for 20,000 houses to be made for Airey Homes of Leeds. Further orders followed for prefabricated wiring kits for prefabricated houses which were being constructed all over Britain. Some of thee were steel houses made for BISF. Some kits were incorporated into houses in Shrewsbury. Over 250,000 wiring kits were supplied for the UK market but the kits were also exported to Kuwait and New Zealand.

In 1950 Hartleys had acquired Duratube and Wire Ltd of Feltham Middlesex who made all the cable for Octopus and other related products. Also Trust Accessories were acquired a year later. 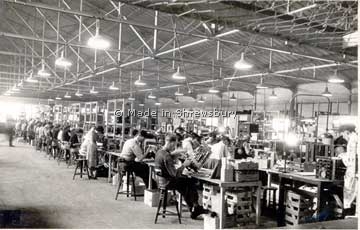 In the 1954 the company made the national headlines when Hartleys took over Baird Television Ltd and a new company Hartley Baird Ltd was formed. Mr Hartley was appointed Managing Director.

The company made made the most of the post war consumer boom and produced a wide range of electrical and mechanical products including wood burning stoves, Baird television sets for Radio Rentals, Radio sets for the Hacker company and their own Wondergram and Supergram. The Taperiter system was used in large office blocks as a tape based dictation system.

Building on knowledge it had gained with other manufacturers the company developed a tape cassette system THE TAPE RITER. The system used full size reels in a metal case that could be lifted off the tape recorder that had recorded the work and placed on another machine and played by a typist who would transcribe the tape.

Was this the first tape cassette system?

The Tape Riter certainly predates the Phillips system by at least 7 years. See the image below.

Mike Smith from Hertfordshire has donated a Tape Riter to the Made in Shrewsbury collection.

The company had several contracts to supply the Ministry of Defence with electrical and electronic equipment including Tape Recorders and other Naval equipment. 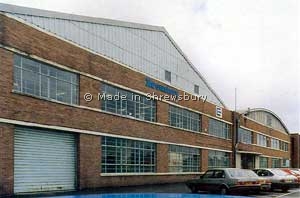 A large factory needs big orders to keep it busy and these came in irregularly the company had some difficulties and in 1972 the receiver was called in and sold off the Octopus Wiring division to Lucas and moved to Lancaster Road. The new division has had a variety of contracts and although mainly related to the commercial motor trade one of the first orders was for house wiring kits for Alfred Macalpine for a project in Tamworth.

The factory building itself has an interesting history as it dates from World War I and can be seen to be early Aircraft Hangers for the repair Workshops based in Monkmoor. One remaining feature is the BELFAST ROOF on the right hand side of the building. When the left hand side was replaced in the early days of Hartleys the Belfast roof supports were recycled in the Dairy at Frankwell and remain in use in 2006.

Hartleys Cashes in on the Post War Consumer Boom

As the country emerged from the war economy Hartleys was in a good position to capitalise on its strengths. Strong leadership and a skilled workforce and a market demand for the new essentials of post war life. Homes with electricity with wiring for Radio, Television, Tape Recorders, Record Players and Radio Record Players.

The cold war continued and the defence electrics and electronics and post design services continued to be an important part of the companies business to the end. The company prized its Defence Contractor Quality Standard 05-21 which enable it to tender for electrical and mechanical contracts

The company employed several hundred people with a wide variety of skills and we can see from this photograph from the 1960`s the machine shop with lathes and presses guillotine and pressbrake. These combined with the plating and the paint shop enabled the company to produce a whole variety of metal products. 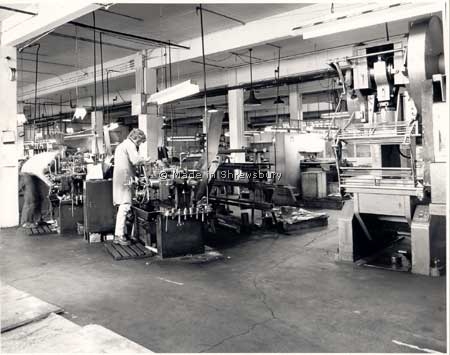 There is no doubt that the men that used these machines were highly skilled but the machines themselves had seen better days and when Cray got involved they did not see a future for the mechanical side as the group had more modern facilities at other locations. Cray did invest in some new assembly equipment but this did not always meet expectations.

Hartleys is Proud of its Apprentices and Training Record

The company trained many of its employees either formerly or with on the job training and valued its own apprentices. The apprentices that qualified in 1971 are seen receiving their awards. From the left M.E.J.Butler, C.J.Booth, D.F.Paddock, M.H.Berry, T.J.Perks, G.G.Millington, A.K.Bennett, K.J.Morris, R.A.Evans and Mr R .Evans,chief inspector and training officer.

The training school was a very important part of the company and many engineers served their apprenticeships at Hartleys.

When times got hard training was one of the first things to go and the apprentice school stopped in 1972.

Electrical and Electronic assembly work always featured at Hartleys and this work was mainly done for other manufactures who were short of capacity. Several assembly contracts were received to assembly consumer products including Radio for HMV and TV for Baird and Radio Rentals. 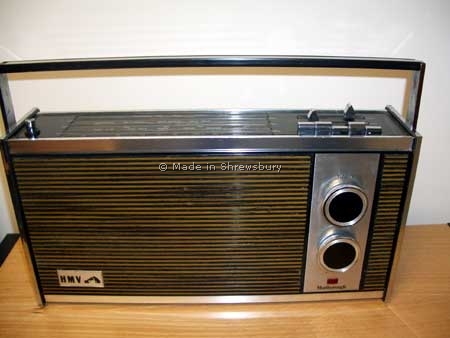 ONE OF THE MANY JOBS FOR THE WELL KNOWN BRANDS THAT HARTLEYS ASSEMBLED. THE INTERNAL COMPONENTS FOR THIS RADIO WAS ALMOST IDENTICAL TO OTHERS THAT WERE MADE THE ONLY DIFFERENCES BEING THE COLOUR AND WOOD GRAIN. THESE WERE MADE FOR THORN WHO OWNED THE BRAND NAMES. 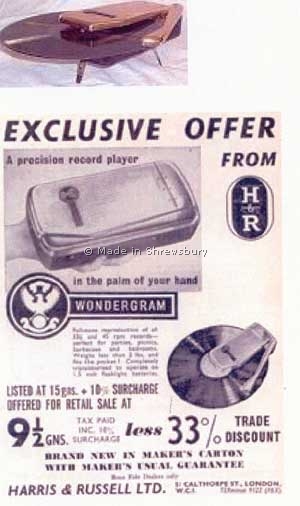 One of the many products made in Shrewsbury was The Wondergram. A compact and portable Record Player that looked like an oyster shell.

It opened and the record was put in it then closed and the arm was lowered and music followed.

Several have survived and I would like to know if there are any locally to borrow for the exhibition.

The John Symonds era comes to an Early Close

When Bill Hartley moved on the main driver behind the business was very well respected John Lionel Symonds who had been sales manager and who lived in Condover. Sadly he died in 1969 aged 49 and the company never recovered from the loss. 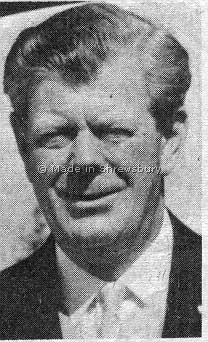 John Symonds was born in London and grew up in Hertford where he was educated at William Cowper School.He joined the Hertfordshire Mercury and took a diploma in advertising. In 1938 age 18 he joined the Herefordshire Yeomanry (Royal Artillery) and was in the Dunkirk evacuation where he spent many hours in the water before being taken off and this according to medical opinion was the start of his heart problems.

After the war he was living in South Wales where he met Bill Hartley and joined the company as sales manager and moved to Shrewsbury. He steered Hartleys through many difficult trading periods and was appointed joint managing director of Hartley Crosland shortly before his death.

John Symonds had a previous heart attack ten years earlier and had been advised to take things a little easier but it was not in his nature.

His hobbies included golf and sailing and his life style epitomised his work hard and play hard philosophy. He was a member at both Shrewsbury Golf Club and Ludlow Golf Club and Shropshire Sailing Club and the Royal Anglesey Yacht Club were he had a holiday home.

THE CRAY AND C&N YEARS 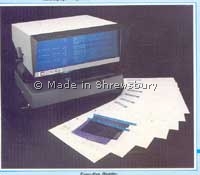 Major contracts achieved in the last years of the companies trading included supply of Microfiche Readers for Barclays Bank and also readers for the newly formed British Telecom for the Directory Enquiry Service. 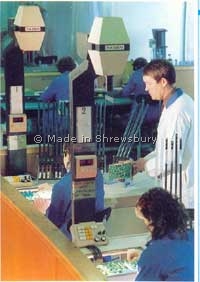 Advanced printed circuit board assembly was a later facility offered by the company. 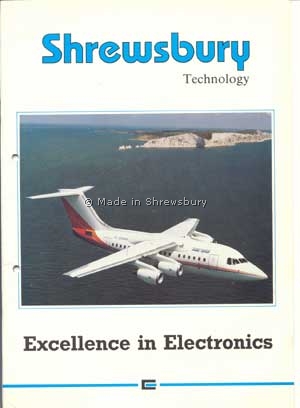 The company re-branded as Shrewsbury Technology and continued to develop new products.

The company also produced computers for the Stock Exchange. New products were developed including a Liquid Level Monitor but when the Cray Group itself got into difficulties Shrewsbury Technology was closed in 1993.

The Related Document below is a Company Brochure saved as a pdf is from the early 1980`s and lists the products and services available from the factory. (Thanks to Bob Leek) Click on the link to download to view and you can also get Adobe if you need it.

You will need Adobe Acrobat to view some or all of these files. Click here to get it.