I was apprenticed at the above factory in the early part of the sixties (in the last century!). Here is my account of the times there. I trust anyone reading this who was at the factory during this time will contact me?

This is taken from my rather lengthy account of these times.

I had to have some sort of working direction in my life, and had already tried several alternatives with differing outcomes! So, it was this in mind (helped by my father’s considerable reputation a mechanic) that led me to Hall Engineering where I was to serve an apprenticeship of five years.

At the time I was none too happy at the prospect of ‘tying up’ five years of my life in servitude, in a dark, dusty factory. As I look back now, the benefits far outweigh the disadvantages! Besides teaching me all the skills and practises of light engineering, it taught me self discipline, although some did,at the time, (rightly) question that fact, as probably you will when the full extent of my daily activities becomes known to you!

I remember very little of my first day there, although I suppose it would have started with a tour of the factory, by the ‘training manager’ Mr Harry Barber (or Ali Barber, as we called him?) He reminded me for all the world like Nigel Bruce, the fellow who played Dr Watson opposite Basil Rathbourne’s ‘Sherlock Holmes’ in the old black and white American movie classics, both in appearance and bumbling manner! I had met him some time before when I went along to the factory with my mum and dad. Whether or there was an entrance examination-I suppose there must have been, I know not, as my good friend, Keith Reece was keen to go there, but never managed to gain an apprenticeship. I realise now that my father’s great reputation and a lot of cajoling,resulted in me finally being offered a place there!

Keith secured a job at the little petrol station that was opposite the factory gates, where he too served an apprenticeship (of sorts, but it was more domestic car orientated.) There were only a certain amount of places so I was lucky to be accepted.

The factory was only a relatively short distance from where we lived, so I settled soon into a fairly comfortable routine. The hours were long though (we started at 7-30 am-prompt, and finished at five pm) If you were more than three minutes late after the mighty klaxon (works hooter) sounded, summoning all to get within ‘post haste’, then a quarter of an hours pay was deducted – we had to ‘clock in and out’, in the training bay as well as the factory-they wanted their ‘pound of flesh’ and, I suppose, rightly so!

I was earning about £3-18 shillings (less than four pounds in today’s currency) for a forty eight hour week-part of which went to mum for ‘housekeeping’.

The training bay was equipped with many of the tools and machines that they had on the ‘factory floor’, but they were a bit ancient – probably superseded models or those that had worked beyond their intended lifespan, and had been ‘tarted up’ and made good again for use here. 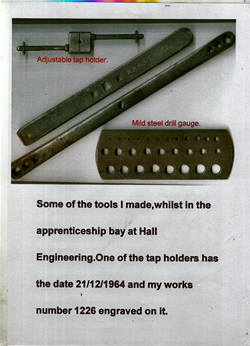 Right at the outset I showed an aptitude for engineering – it just came naturally and I very soon gained this reputation of being a bit of a ‘fixer’.

This stood me in good stead as some of the other apprentices, though passing the initiative test to gain a place, and probably superior academically to me, didn’t really have a clue as to what they were doing, and I gained a lot of ‘cred’ advising them, before ‘Ali’-Mr Barber, as we always had to address him, returned and showed his displeasure at a job set and not completed.

Before long, I was making many friends on the ‘shop floors’ and, by doing ‘little home jobs’ (they were called ‘foreigners’) for them I gained a wide circle of ‘colleagues’ who would always ‘pull in a favour’ for me. I had connections everywhere, it was incredible.! Part of the training involved working, under supervision, with one particular man.for a set period. Whilst in that ‘shop’ with him, he was responsible for you and was supposed to pass on all, or as much as possible that he knew, on to you.

Some of the men I ‘worked’ with (I use that term, loosely!?)were absolutely amazed when I was passing all my ill gained knowledge on to them!!

I must have been a ‘nightmare’ to work with, always ‘here, there and everywhere’, working on some ‘home project’,without a care for the firm or the poor skilled person I was apprenticed to! Most of them let me have a ‘lot of rope’ and just got on with what they had to do-they deemed it better and life would be easier for them!

I knew I had ‘arrived’ when Bert Alexander’, foreman in one of the sections, came to me one day and asked me to make a part for his motorcycle! He was a very articulate and conscientious man, but we were both avid bikers and had some sort of rapport, but he told me that I should not let him catch me making it!? He had a lovely AJS, with a chrome petrol tank, but I had a very unusual (it’s the story of my life?)motorbike, even in those days it was something of a rarity – a Douglas ‘Dragonfly’, with horizontal ‘pots’, and ‘sprung’ suspension! I was always making parts for it and adding modifications-it was ‘mighty’, and people were always looking admiringly at it… It was a truly beautiful machine, but,I’ll tell you more about it at a future juncture.

On several occasions, a good friend (remaining nameless to protect the innocent!?) who was a ‘time served turner’ (lathe) ‘broke down’ (stopped and dismantled his ‘set up) just to get my latest foreigner (on a tight time schedule?) completed!

Many of the jobs in light engineering were of a repetitious nature,so the `setting up` was(as preparation is for most things in life)all important. This done, it was relatively easy to run off the parts in great quantity, quickly and with stunning accuracy. So you can realise the magnitude of the operation to get the job ‘set up’, and also, many jobs were ‘piece work’-the profit/margin factor being determined by the sheer accuracy of the operator and the volume of the numbers of the product being ‘turned.’ For someone to take the risk of ‘breaking down’ a job, and thus putting the whole operation behind schedule it had to be for an important reason! I deemed mine to be of utmost importance!? Such was my standing (I now realise I was just another somewhat ‘cocky teenager) that I gained the ‘handle’ of-THE BODGER. This was not meant in a derogatory way, nor was it taken , indeed, it was quite an honour to have such a name, it more implied a ‘fixer’ and I was so pleased to adopt it, that I had it emblazoned on my motorcycle helmet, together with a motif that looked like a zigzag flash of lightening!
‘Very appropriate,- I thought-the Bodger had arrived!

I met many very clever and skilled men on my ‘journey’ over the next five years, through all departments in the factory. Some of them, we will never see the likes of again.

Jimmy ‘jig’ Baker (or ‘Immy J,Aker B’ ,as he was known from his early days in the RAF, when they not only scrambled the planes but the names of those who flew in them too!) He could design and make a ‘jig'(a device for producing many articles accurately and efficiently)for just about any application. After a while with him, I too found I could do this, but he was the ‘uncrowned ‘King’ and was not averse to letting me know this, if I got a bit too ‘cocky!’

He was an absolute master at sheet metal formation. He could make any shape in sheet metal, and he had the knowledge to accurately design and draw the plans too. I WAS IN AWE OF THIS MAN! He ‘ate, breathed and slept’ sheet metal and yet, in his own way, a very humble person.

He made metal with his little set of ‘toffee hammers’, bend to his every whim. It was ‘poetry’ to watch him forming a cap or lid out of one piece of metal and even more amazing that he could work out beforehand exactly how much material was required for a particular job, and the best way to cut it up for minimum wastage. He could design the most intricate air conditioning ducts-bends, with twists incorporated in them were really no problem to this diminutive ‘wizard.’

I didn’t know it then, but he was probably the finest craftsman I have ever met!

He was much respected in his own little area in the fabrication bay. He could be a right ‘cantankerous old bugger’ at times and used to cringe at my ‘extra curricula antics’, but he too gave me a lot of leeway. I dearly wish I had told him just once how much I admired his great skill-a labour learned in the sweat and dust of a factory floor somewhere and, no doubt, many hours studying the complexities of sheet metal forming.

I can find no other words to aptly describe this wonderful Scotsman.

These were just two of the many who helped me along the way-I spent about six months in each department, then it was back to the training bay, for a refresher course and to see what, if anything, I had learnt.’