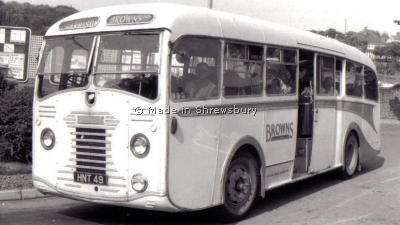 On 1st October 2006 I had a meeting with Bob Budden of Shrewsbury who had started his working life as an apprentice at Sentinel in 1955 and he retired in 2001. Bob has a few items from the early days and I was able to view his archive and make the following notes which are based on his recollections and my own research.

A Shrewsbury made Sentinel bus operated in Donnington Wood.

Sentinel manufactured bus chassis and engines and I received an email from Mr Phil Brown of Telford whose great grandfather founded Browns Bus company that ran Sentinel buses in Donnington Wood. The photographs below are of his fleet of Sentinel Buses.

The history of the Sentinel Steam Waggon in Shrewsbury has been written in two volumes by Joe and Tony Thomas published privately is not currently in print. The Sentinel Drivers Club also has an extensive archive and is actively promoting all things Sentinel. See Links at the bottom of this page.

The Sentinel business had been founded in 1875 in Glasgow as a marine engineering company when Stephen Evans Alley took over the company from his father in 1898. In 1903 he took over the Shropshire based company of Simpson and Bibby in Horsehay and moved the manufacturing of Steam Wagons to Glasgow.

In 1915 the Sentinel Steam Wagon Company moved to a greenfield site on the northern outskirts of Shrewsbury between the main A49 and the Shrewsbury Crewe railway. and production began.

By the 1920`s production was substantial and locomotives as well as steam wagons were being made. The company were skilled engineers and also made machine tools. The company had extensive holdings of land and built homes for the workers opposite the factory. These had the benefit of central heating with radiators fed steam from the companies boilers by underground pipes.

By the 1930`s the unladen weight restrictions of road going vehicles meant that diesel was favoured at the expense of steam. The company stayed too long with steam and a new company took over the assets and liabilities Sentinel Wagon Works (1936) Ltd

In the late 1930`s the prospect of war turned the company around as it gained substantial military contracts for the supply of machine tools and vehicles for active service.

From 1938 until 1946 on the 15 acre site the company had a Foundry, a Smithy, a Frame and Sheet Metal Shop, 2 Machine Shops, and 2 Fitting Shops, The Squid Shop ( an anti-submarine weapon) a Tracta Joint Shop, a Shell Shop(4.5′ HE Shells) a Tool Room, a Coppersmiths, a Joiners Shop, a Pattern Shop, and a Laboratory and Balance Room, a Processing Plant making Kitchens and Bathrooms for prefabricated Houses. The site also had its own army the âS Coy 1st Salop Home Guard.â

During the war an appeal had gone to America to supply the UK with engines of all sorts and in any condition. Apparently the scrap yards of America were scoured and engines of various types and in various stages of wear and decay were boxed up and sent to the UK and Sentinel to be made useful. On arrival the boxes were opened up and the engineers rebuilt them and got them working making parts that were worn out or missing.

The company developed its diesel capability and built Locomotives, Lorries and Coaches all carrying the Sentinel badge and a Sentinel Diesel Engine. A prototype lorry with a petrol engine is believed to have survived.